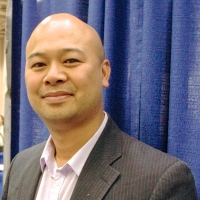 At the 2015 Association of Writers and Writing Programs Conference this year, our team at tatestreet.org were excited to kick off a new collaboration between Tate Street, Robert Pinsky, and the Favorite Poem Project (favoritepoem.org). The FPP was created by Robert Pinsky during his time as Poet Laureate (1997-2000) of the United States to celebrate and document the role of poetry in the lives of Americans. Tate Street filmed a new and more informal branch of the FPP’s online collection of short video documentaries. These videos showcase individuals reading and speaking personally about their favorite poems.

Robert Pinsky, the Favorite Poem Project and Tate Street selected a diverse group of readers from the writing conference—composed of editors, translators, educators, fiction writers, and poets—to participate at AWP 2015.

Oliver de la Paz is the author of four collections of poetry: Names Above Houses, Furious Lullaby, Requiem for the Orchard, and Post Subject: A Fable. He co-edited A Face to Meet the Faces: An Anthology of Contemporary Persona Poetry, and serves as the co-chair of the Kundiman advisory board. His work has been published or is forthcoming in journals such as the New England Review, Tin House, The Southern Review, and Poetry Northwest. He teaches in the MFA program at Western Washington University and in the Low-Residency MFA program at Pacific Lutheran University.

Read “I Wandered Lonely As A Cloud by William Wordsworth.

Her poems and essays appear in The New Yorker, O Magazine, Paris Review, The Nation, The New Republic, Kenyon Review, and American Poetry Review among other publications.

Bialosky has received a number of awards including the Elliot Coleman Award in Poetry. She is currently an editor at W. W. Norton & Company and lives in New York City.

Hayan Charara was born in Detroit. His first book of poems, The Alchemist’s Diary (2001), followed by The Sadness of Others (2006). His most recent collection is Something Sinister (2016). He edited Inclined to Speak (2008), an anthology of contemporary Arab American poetry, and his children’s book, The Three Lucys (2015), won the New Voices Award Honor.

Cecilia Rodríguez Milanés is the author of two collections of short stories: Marielitos, Balseros and Other Exiles (2009) and Oye What I’m Gonna Tell You (April 2015); a poetry chapbook, Everyday Chica (2010) and spoken word CD, Everyday Chica, Music and more (2011). Associate professor of English at the University of Central Florida, MFA Graduate Faculty member and specialist is women writers of color, Latino/a literature, teaching and writing.