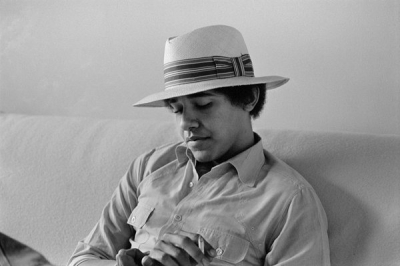 In the most recent issue of Vanity Fair, author David Maraniss sheds light on the dark and romantic years Obama spent in New York City following his graduation from Columbia. The piece includes excerpts from letters and diaries of both Barack and his New York girlfriend, Genevieve Cook, whose flowery descriptions of our President (“Today, for the first time, Barack sat on the edge of the bed—dressed—blue jeans and luscious ladies on his chest [a comfy T-shirt depicting buxom women], the end of the front section of the Sunday Times in his hand, looking out the window, and the quality of light reflected from his eyes, windows of the soul, heart, and mind, was so clear, so unmasked, his eyes narrower than he usually holds them looking out the window, usually too aware of me”) have already sent hearts a flutter all over the Internet. But we at TSHS were even more taken aback by some of the President’s own writing, including a critical look at our favorite, T. S. Eliot, and some prose so lovely it sets our literary souls ablaze.

Politics aside, this is some good stuff.

In a letter to a different girlfriend (don’t act surprised; you know Barack’s a hearthrob) the Columbia grad mused on T.S.: “I haven’t read ‘The Waste Land’ for a year, and I never did bother to check all the footnotes. But I will hazard these statements—Eliot contains the same ecstatic vision which runs from Münzer to Yeats. However, he retains a grounding in the social reality/order of his time. Facing what he perceives as a choice between ecstatic chaos and lifeless mechanistic order, he accedes to maintaining a separation of asexual purity and brutal sexual reality. And he wears a stoical face before this. Read his essay on Tradition and the Individual Talent, as well as Four Quartets, when he’s less concerned with depicting moribund Europe, to catch a sense of what I speak. Remember how I said there’s a certain kind of conservatism which I respect more than bourgeois liberalism—Eliot is of this type.”

And later, he describes for her the “inertia” of New York City with such careful attention, we’d swear this was workshopped: “Moments trip gently along over here. Snow caps the bushes in unexpected ways, birds shoot and spin like balls of sound. My feet hum over the dry walks. A storm smoothes the sky, impounding the city lights, returning to us a dull yellow glow. I run every other day at the small indoor track [at Columbia] which slants slightly upward like a plate; I stretch long and slow, twist and shake, the fatigue, the inertia finding home in different parts of the body. I check the time and growl—aargh!—and tumble onto the wheel. And bodies crowd and give off heat, some people are in front and you can hear the patter or plod of the steps behind. You look down to watch your feet, neat unified steps, and you throw back your arms and run after people, and run from them and with them, and sometimes someone will shadow your pace, step for step, and you can hear the person puffing, a different puff than yours, and on a good day they’ll come up alongside and thank you for a good run, for keeping a good pace, and you nod and keep going on your way, but you’re pretty pleased, and your stride gets lighter, the slumber slipping off behind you, into the wake of the past.”

Wow, Barack. Just Wow. If you weren’t already running the country, we’d be hardcore recruiting you to our MFA program. As it is, I guess we’ll just have to cross our fingers for four more years of Presidential poetics.